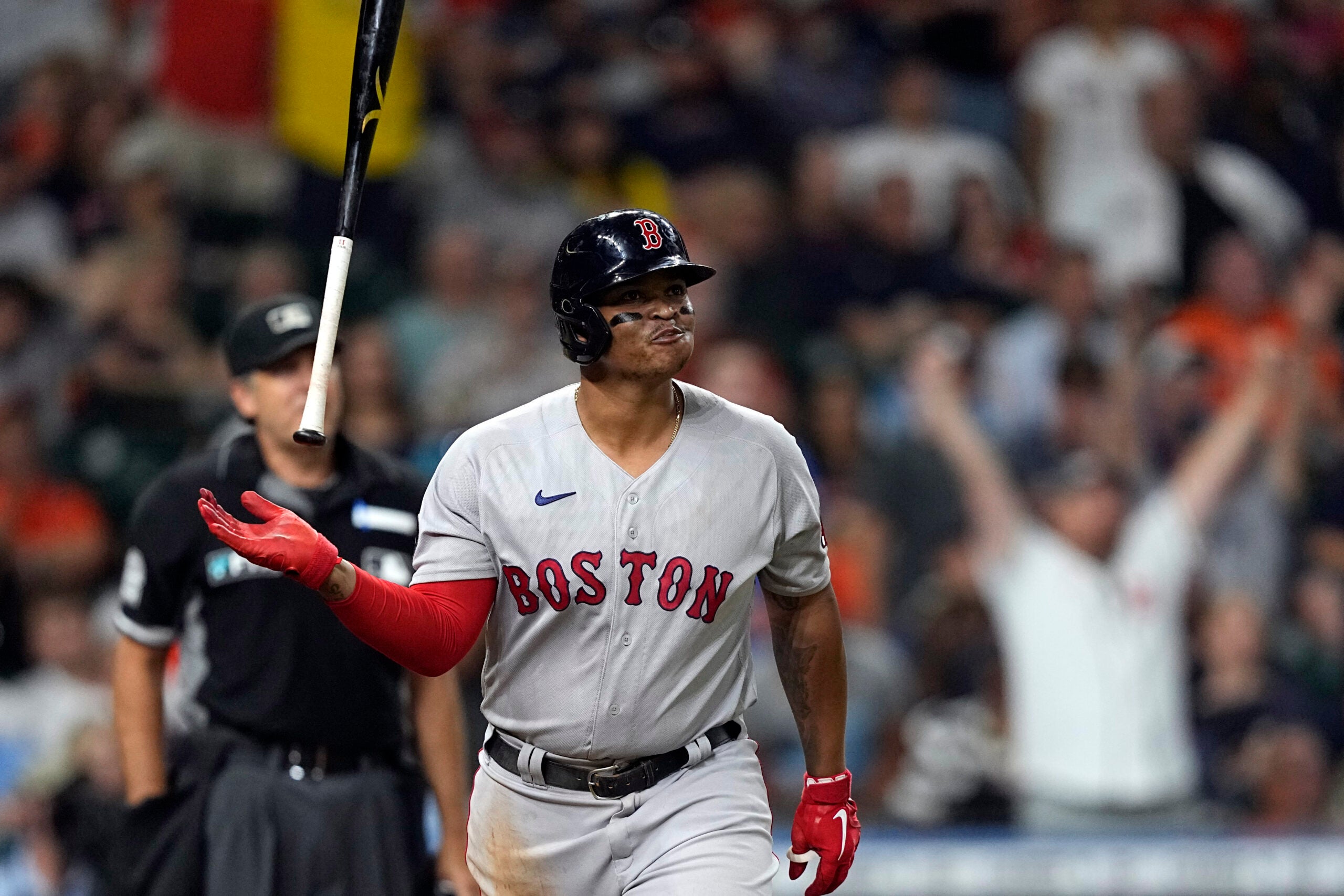 The Red Sox won their third straight game and second straight against the Astros on Tuesday, claiming a 2-1 victory just hours after the trade deadline.

After giving up a run in the first inning, Kutter Crawford was excellent through six frames — allowing seven hits and one walk while striking out six Astros batters. The Astros never really threatened him again, save for a pair of two-out singles in the fourth inning that amounted to nothing.

Meanwhile, the Red Sox’s offense did just enough. In the fourth, Rafael Devers — back in the lineup after he was sidelined for 10 games with hamstring inflammation — doubled in Tommy Pham, who singled and scored a run in his Red Sox debut. Two innings later, Devers came through again with a monstrous solo homer to right that put the Red Sox up 2-1.

And that was it. The Astros threatened in the eighth when Austin Davis allowed a leadoff double by Yordan Álvarez and issued a walk to Alex Bregman, but Davis struck out Kyle Tucker, and Tanner Houck finished the job — retiring all five batters he faced.

Player of the Game

Rafael Devers — You could take your pick between Devers and Crawford, but Devers gets the nod for returning from injury with a vengeance and giving the otherwise anemic Red Sox offense everything it needed.

A three-game winning streak. A team that mostly (with apologies to Christian Vázquez and Jake Diekman) survived the trade deadline. A game above .500. A pair of wins against an elite Astros squad.

The Red Sox aren’t exactly back in the thick of things, but they’ve done just enough in the last three days to earn some eyeball emojis.

1. Devers returned with some enthusiasm. Per Baseball Savant, he hit the cover off the ball in three out of his four at-bats — a 113.3 mph double, a 108.6 mph homer and a 106.4 mph groundout to go with his leadoff strike out. His homer, meanwhile, had a 40-degree launch angle.

Sometimes it’s a little unclear whether a ball will leave the park from the initial broadcast angle. This was not one of those homers.

Pham got his first look at Devers as a teammate and predictably left impressed.

“I’ve seen it first hand from the other side — such a good, good player man,” Pham told NESN’s Tom Caron after the game. “Just how young he is and what he does, first game back, whacking the ball like that. Special.”

2. In his debut as a member of the Red Sox, Pham — who went 1-for-4 — showed a little bit of everything Red Sox fans presumably expect to see from him. He ripped his line-drive single in the fourth, and then glowered ahead as Devers prepared to hit. When Devers ripped his double down the right-field line, Pham put his head down and ran with purpose, diving into home ahead of the tag to tie the game. When he bounced up and high-fived JD Martinez, he maintained his stony expression.

Pham — who the Red Sox acquired for a player to be named later on Monday — boasts a good hard-hit percentage and good speed on the base paths. He might bring a little fire to a Red Sox team that could use it as well.

“It’s always good to contribute,” Pham told Tom Caron. “It’s been a crazy 24 hours for me. I’m just glad you made it in time.”

Was he running on pure adrenaline?

“Two cups of coffee and a Red Bull,” Pham said with a smile.

3. After Crawford threw 69 pitches against the Guardians, Cora caught up with him the following day.

“How are you feeling?” Cora asked the 26-year-old.

“I’m good,” Crawford answered, according to Cora. “I only threw 65 pitches.”

On Tuesday, Crawford threw 94. He forced 12 whiffs including six on his cutter, and his fastball hit a maximum velocity of 95.4.

“He was really good,” Cora told reporters after the game. “He didn’t start the way we wanted — they came out swinging as they always do — but he was able to slow it down and make some pitches, start mixing up some pitches, and he gave us six [innings]. … Today we needed him to go deeper, and he was really good. He’s been outstanding for us.”

4. The Rays lost to the Blue Jays on Tuesday, which allowed the Red Sox to pull within two games of the final wildcard slot. They are far from alone — the Guardians, Orioles and White Sox are all still ahead of them — but they’ve done enough to make Chaim Bloom’s refusal to turn the Red Sox’s lineup into an estate sale before the deadline interesting.

“Little by little, we’re finding our stride.” Cora said. “… There’s a lot of [teams] there, but one thing’s for sure: last year going into the last game of the season, there were four teams there, and we were the ones that advanced, and we made some noise in October.