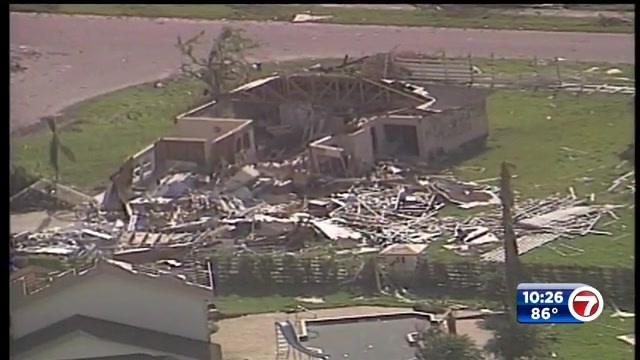 (WSVN) – Thirty years ago, Hurricane Andrew made landfall in South Florida. The Category 5 storm tore through the region, leaving sheer devastation in its wake. 7’s Patrick Fraser takes a look back at that fateful day.

7Weather meteorologist: “We have the core of the hurricane coming in here. It’s well-formed, and it’s going to cause significant damage.

“Significant damage.” Who knew what an understatement that would turn out to be.

Ken Tolliver: “It’s really, really picking up here on Collins and about 82.”

Andrew was supposed to hit Miami Beach, but it took a dip and landed in South Dade.

Patrick Fraser: “The trucks almost tipped over. We’re coming down.”

Alice Jacobs: “At this point, guys, that’s the best we can hope for. We don’t want anybody to get hurt here.”

If you were in the path of Andrew, you probably weren’t concerned with getting hurt. You were worried you were going to die.

Man: “You can feel this whole wall moving that I’ve got my shoulder against.”

Andrew’s 140 mph winds, combined with hundreds of tornadoes, destroyed everything.

As the sun came up, I will never forget the sight. No one who was there during and after Andrew ever will.

Homes leveled, cars smashed. It sounds strange to say, but if you just lost a roof, you were considered lucky.

Arlene Rodriguez: “The roof came off, and all of us were screaming in the room.”

Many people were forced to run from room to room as their homes blew up around them.

Man: “The rumbling, the shaking.”

Woman: “He dug me out of the rubble twice and put me where I needed to go.”

But all the daylight did was shine a light on the destruction… and make it clear the nightmare had only begun.

Girl: “I wish it wouldn’t have happened.”

And it got worse. No food, no water, no help.

Man: “It’s survival of the fittest. Every man and woman for themselves.”

Finally, Kate Hale, then the head of Dade County’s Emergency Operations Center, challenged the country and spoke out in frustration.

Kate Hale, Dade County emergency manager: “Where in the hell is the calvary on this one?”

And the help started arriving.

President George Bush landed in a field near what was left of Homestead to see the National Guard go to work.

Tents give families a place to sleep at night.

Woman: “It’s better than anywhere. We have light here; we have everything.”

Supplies poured in. Trucks, helicopters bringing water and food for more than 100,000 people.

Parents stood in line to get food for their babies and then slept in tents with hundreds of others, one eye open to make sure their children were safe.

Woman: “Can you move back in your house?”

Many people gave up, got their insurance money, loaded up a truck and took off, never to return again.

But Homestead did recover, not in weeks or months; it took years. Today, the city is bigger and better, with no sign of that horrible storm.

Unless you search people’s memories.

Man: “A lot of work, a lot of dreams into this, all gone overnight, just in two hours.”

Woman: “Words can’t explain it. You have to go through it yourself.”

Copyright 2022 Sunbeam Television Corp. All rights reserved. This material may not be published, broadcast, rewritten or redistributed.